Disclaimer: I received a travel stipend and a swag bag of goodies from Brooks, Altra, Vooray, Handful, CEP Compression, Nuun, Addaday, Arcanum, Vuori, Incrediwear, and Zwift to attend The Running Event for TRE Influencer Day in Austin, TX on November 29-30. 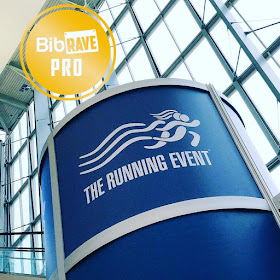 If you follow me on social media, you likely saw an influx of orange from my accounts at the end of last week because I was one of twenty BibRave Pros selected to attend the first TRE Influencer Day at The Running Event in Austin, TX!  The Running Event is "the premier conference and trade show for running retailers".  I didn't really know what I was getting into before I left.  It was CRA-ZY.

I was a little nervous heading into TRE because I am NOT good at networking.  But my theme of 2018 was to pursue the uncomfortable, and applying to attend this was in line with that theme.  Like everything else that I did outside of my comfort zone this year, I was not disappointed!

Thursday November 29
I had a 4:30 alarm to make it to my flight out of Milwaukee.  I am completely out of routine of waking up early so I didn't sleep at all the night before since I was nervous I would miss the alarm.  I made it out of bed, donned my BibRave orange and got to the airport.  As you can see in the photo below, taken during my layover in Kansas City, I was SLEEEEPY. 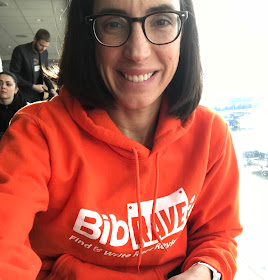 I made it to Austin, TX around 11 AM.  Lucky for me, my three roommates for the night were arriving around the same time.  I met up with Erica first and then as we watched for orange on the escalator, assembled quite the group of BibRave Pros.  We made a plan to go out for lunch.

I had only met one of the BibRave Pros in person before this event so it was fun to meet a bunch of new people that you "know" from social media.  After lunch, we got to our hotel and unpacked.  We had a little time before we had to be at the convention center hotel so we decided to try out the motorized scooters we saw all over downtown Austin. 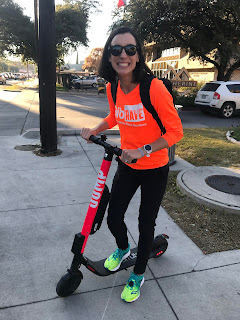 I had to send my kids a pic of how cool their mom was, ha ha ha.

We got to the Hilton shortly before 5:30 PM for our first event: The Zwift Run!  Zwift held a reception for us where they demonstrated their foot pod technology.  If you are a cyclist, you may have used this technology before.  They had two amazing Woodway treadmills set up in front of a big screen where four pre-selected Bib-Rave Pros ran and showed us all how it worked.  It made me excited to go back home and try out my Zwift pod (you can see it on my shoe in the scooter picture above) on my treadmill.  The Zwift team were on hand to answer any questions.  They also gave us beer and cheese so I was pumped about that. 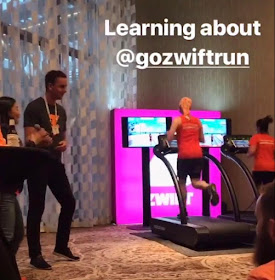 During this reception we also got the mother of all swag bags! 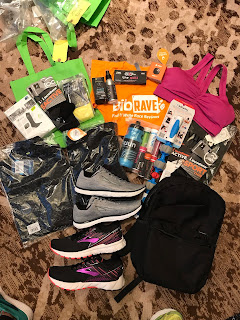 I mean, we were warned that our swag bags would be epic, but I don't think any of us were expecting this level of craziness!!  In the coming weeks, I will be writing more about everything we got in more detail!  Thank you thank you THANK YOU to the brands that provided us with stuff:  Brooks, Addaday, Vooray, Altra, Handful, Arcanum, Nuun, CEP Compression, Zwift, Vuori, and Incrediwear.

After the Zwift Reception, we headed to get BBQ.  YAAAAAAASSSSS.  Give me all the brisket. 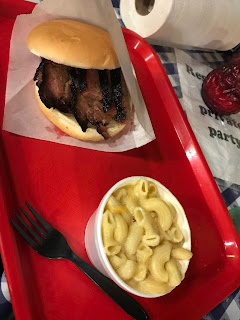 After the BBQ, we headed to the Brooks Party.  Several other people who arrived early to the party with us told us that this party always gets crazy.  It was really quiet at first so we grabbed a beer and chatted.  And then Des Linden showed up.  FOR REAL.  At first I was hesitant to grab a photo with her, but I asked her agent if she was annoyed by this and he said to go ahead and get in there and so I did.  I felt like a GIANT next to her.  In this pic, I am crouching down and am still a head taller than her!  SQUEEEEEEEEEEEEEE! 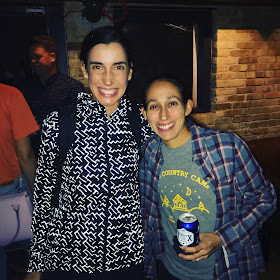 Side note: Aren't the Brooks jackets we got super cool?  They are reflective!

Prior to getting to the party, my roommates and I thought we would stay about an hour.  But then the band started and we were dancing and so we left around 11.  I WAS SO SO TIRED.  I crashed in my bed. 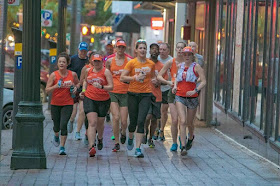 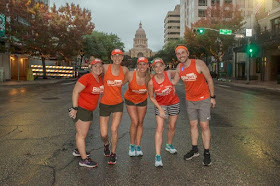 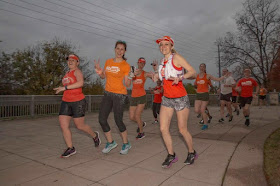 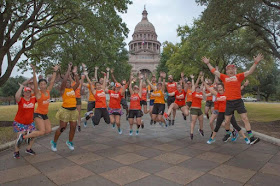 After the group run, we somehow had to get back to our hotel, showered, and back to the convention center in less than an hour.  My roommate and I took motorized scooters and mid-scooter ride I discovered that my "go" button was broken.  I should have gotten off the scooter, but I didn't want to be late to our tour, and we were SO close to the hotel.  Unfortunately, I ended up flying off the scooter and landing on my side.  ARGH.  I had some minor road rash and I know now that I ended up fracturing my rib from that fall.  Anyways, we ended up ditching the scooters and running to the hotel, quickly showering and I ran back to the convention center. I made it there just as they were opening the doors for our tour.

From 8:30-11:30, we visited the booths of the brands that provided us swag.  This was really fun because we were able to hear about the motivation behind starting the company, see future products that were slated to be released to the public next year, and ask questions.  Every single brand was super engaging and nice to us.  Incrediwear even had Olympian Manteo Mitchell at their booth!
The rep at Brooks also fell off his scooter the night before so we had to take a pic showcasing our injuries. 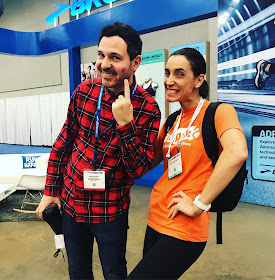 All in all the vibe during our tour was exciting, and loads of fun.  It was fun to be able to interact with the different products.

After our tours were done, we were free to roam the exhibit hall until it closed at 1 PM.  AND YOU KNOW I was there until the doors closed.  I scored a lot more free stuff, mostly food items, and had fun learning about some new-to-me products.

I think it would be SO FUN to be able to go to the full conference and hear the speakers, etc.

A group of us grabbed some lunch after the expo and then it was time to head back to pack our bags. 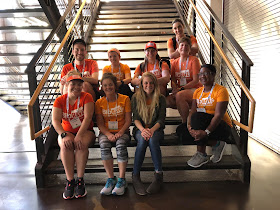 Packing the bags.  The struggle is real.  I ended up leaving the old pair of running shoes that I came to Austin wearing.  My suitcase and backpack were CRAMMED full of stuff.  We took an Uber back to the airport and the TSA guy told me to take any food items out of my suitcase.  I started laughing and said, "Half of my suitcase is food items."  I had to go through some extra screening with all of my swag.  The TSA guys had some fun stories of people coming through earlier in the day with a lot of the same stuff I had.  But I didn't have to throw any of the stuff away!  THANK YOU GOD!

I boarded my flight to Houston at 6 PM.  After a short layover in Houston, I was en route to Milwaukee and home in my bed by midnight.  WOWSA.  I may still be trying to catch up on sleep from this trip, but it was so worth it.  Thank you to BibRave, The Running Event, and all of our amazing swag sponsors.  I had a blast! 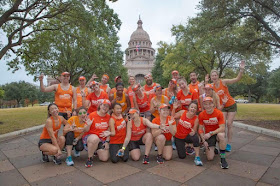 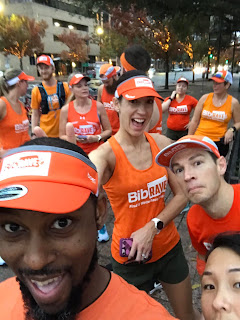