Disclaimer:  I am running the Christie Clinic Illinois Marathon as a BibRave Pro, which means my entry fee was covered for me. Learn more about becoming a BibRave Pro (ambassador) and check out BibRave.com to review, find, and write race reviews!

Join me at the Illinois Marathon and use code bibraveillinois2019 to save $5 on any of the races! And let me know you'll be there so I can look for you! 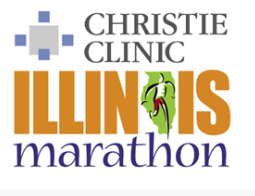 I officially started my training cycle for the Illinois Marathon on December 26, the day after Christmas.  I had figured this out well in advance of that date so I knew it was go time.  I am again using the Hanson's Marathon Method advanced marathon training plan.  The Hanson's plan start mid-week for week 1, but I tried to keep consistent and stay with 6 running days for the entire week 1.

This will be my second time using the advanced plan, and I already feel better about it than I did last marathon training cycle.  I am largely chalking this up to the fact that I had exactly one month recovery from my spring marathon before jumping into training for my fall marathon where as I had six weeks between my fall marathon and the beginning of this training cycle.  It may not seem like much but I was dragging for the first several weeks of my fall training cycle and I feel peppy and ready to go this time around.

One exciting thing about the Illinois Marathon is that they have elite status, which I applied for and was granted entry.  The standards for entry for women are a 3:12 marathon or a 1:32 half marathon within the past two years. 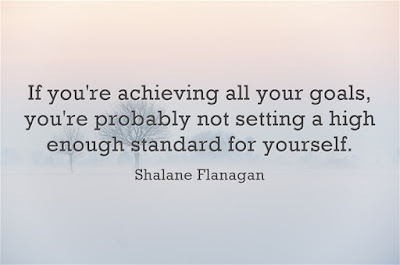 I have some big goals for the Illinois Marathon, largely inspired by Shalane Flanagan's quote above. I want to really push myself this training cycle.  Hanson's plans are very pace specific, something that has worked well for me in the past.  I use the Hanson's pace calculator to set the paces for all of my workouts and in order to do this, you have to select a goal marathon pace. so I'm setting my goal marathon pace of 6:30, which equates to a 2:50 marathon.  This would be a 9:50 PR for me if I get it.  I told you it was a big goal!  I may have to adjust but I think this is within reach, based on the fact that I was ending my tempo runs at high 6:30 pace at the end of my last training cycle.

Week 2
Week 2 gets a little more interesting with the addition of the first speed workout: 12x400m.  Typically I like 400 m repeats.  I was a little nervous about how it would go given that I know my rib isn't fully healed and my hamstring is on again off again.  It went fine.  I didn't hit my speed goal paces, but I attribute this to the fact that I did this workout in the week morning hours and didn't feel fully awake out of the gate.

At this point I had to go back in the house because my husband had to leave for an early-meeting at work.  I finished my cool down on the treadmill.  I ran exactly 1.13 miles so I could finish out the year at an even number.

Tuesday, January 1
Plan: Off day
Actual: 2 mile hike for the state parks First Day Hike.   We bundled up the kids to enjoy the beautiful snowfall.  Our hike was slow but I was proud of the kids for completing it!

Thursday, January 3
Plan: Easy paced (7:59 - 8:59) 6 miles
Actual: 0 miles.  I overslept and then had to use the only window of time that I had during the day to meet the furnace repair man at our house.  Run my workout or get the furnace fixed in the middle of Wisconsin winter?  I didn't really have a choice with that one!

2018: In Pursuit of the Uncomfortable

2018 was a crazy running year for me, full of lots of good, and lots of room to grow.

Let's go back to the beginning.

My intention for 2018 running was to "pursue the uncomfortable".  Push myself to things I previously thought impossible. 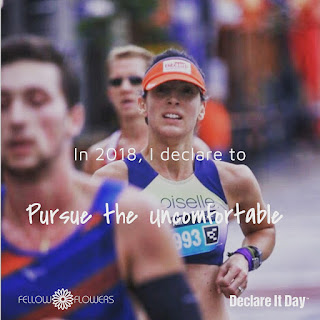 I was going to do this by training my mind and body to break 3 hours in the marathon.  I was also going to attempt to run two marathons in one calendar year, something I hadn't done since 2008.  Talk about getting uncomfortable!

Well, as I have blabbed to anyone who will listen, and if you've been reading this blog for the last year, you know that I broke 3 hours, by ten seconds, at Grandma's marathon in June 2018.  I was elated and wrote how really, if I was going to be real and pursue the uncomfortable, I had to dream big and set goals that were more likely to fail than not.  I wrote this blog post declaring I wanted to try for an OTQ (Olympic Trials Qualifier) before the Jan 2020 deadline. It is my favorite blog post that I wrote last year.

Then I got lazy.

I don't mean physically lazy.  Lord knows, I worked my body HARD over the summer and fall months for Madison Marathon.  I added on the miles, using a more difficult training plan than I was used to.  The whole thing was a big pile of discomfort...until it wasn't.  I started running tempo runs FAST.  I was excited about race day.  And, I expected a PR.  I had been PRing in the marathon since Spring 2017.  And I am talking BIG jumps in time.  If I added on more miles, that meant that I was bound for another big PR, right? 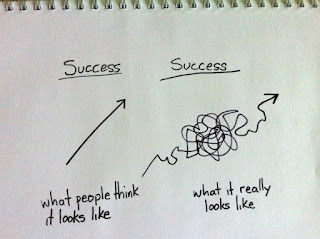 Except I didn't REALLY learn the lesson.  Not when I expected that straight shot to success.  What success really looks like is a bunch of setbacks.  Not just one.  I know that a 3:01:58 at Madison is a good time.  But it was far from the time I was expecting.  Another minor setback.

When I say I got lazy it means that I did not keep up with all of the mental work that took me from a 3:25 to a 3:31 to a 3:11 to a 2:59.  I mistakenly thought that my brain was already trained.  Check the box.   Rookie mistake.  The brain needs to train each cycle with the body.  That marathon is a sneaky beast.  Lesson learned, again.

There was a lot of other good outside of finish times that came out of 2018's intent to pursue the uncomfortable.

Sign up to run a Ragnar Race with people you have never met just a month out from a goal marathon? YES.  The ladies of Oiselle Birdstrike CHI are a FORCE.  Endless inspiration to be found in each one of them.

Apply to go to Austin with 25 other people you haven't met to do two days of networking, even though the thought makes you slightly nauseous?  YES.  Outside of the fractured rib that I took home with me, it was so fun to meet so many passionate, kind runners.

Not to mention getting to watch my cousin-in-law BQ for the first time; my niece run faster than the mosquitoes in cross country, my kids sprint down the streets of Madison, my wonderful high school cross country and track coach get inducted into my high school hall of fame, running Pettit relays with so many Great Lakes Oiselle ladies, "meeting" a fast lady on Instagram, running a half with her (she smoked me), watching my husband pick up a couple days of running per week in the later months of the year, applying for the 2019 American Development team at Chicago Marathon and getting in, applying for elite status for 2019 Illinois Marathon and getting it.