The Cellcom Green Bay Marathon is 18 weeks away!  I have mentioned numerous times on this blog that I am going to use the beginner marathon training plan from the Hansons Marathon Method (HMM) book to prepare for this race.

A few factors went into my decision to try this plan.

1. For the past two years, I have been in the "quality, not quantity" camp.  It's no secret that I find it challenging to find time in each day to run.  I have achieved moderate success with the whole running 4x/week plan  - achieving 2 BQs and a marathon PR by doing so.  However, I needed a new challenge to make me motivated to do another marathon   I feel like I have hit my plateau with the quality, not quantity and I wonder if adding mileage will help me achieve a new marathon PR.

2.  I buy the arguments for the method, as described in the book, enough to give it a go.

4. I am so curious!  I can't remember the exact moment when I became intrigued by HMM, but it was sometime during the fall of 2016.  I think the first I had heard of it was from the We Love Oiselle group page on Facebook where some people were talking about it.   Then, I started seeing it pop up more and more. Towards the end of 2016, I checked the book out of the library and read it.  I joined two HMM groups on Facebook.  Eventually I decided that I was up for the challenge and bought the book (which is updated from the one I read from the library) and committed to trying it.

5.  I like the group aspect of the Facebook page.  My sometimes training partner BH is also using the method to prep for Boston 2017, so I also have a local sounding board.

6.  It is radically different from any marathon training plan that I have tried (e.g., Hal Higdon, personalized plan via coach, Train Like a Mother: Own It ).  I have to run six days a week for eighteen weeks.  HOLY SHIT.  That blows my mind.

7.  I don't have to run 3 - 20+ mile runs in preparation.  Yes, yes...I know that the Hanson plan is tough and that it is naive to just look at the long run mileage.  But I'm not going to lie - not seeing a twenty-something mile run AT ALL is kind of awesome.

At first I was not sure which plan I should use - the "Beginner" version or the "Advanced".  After trolling the HMM Community group page on Facebook, I determined that I would use the Beginner plan, which is recommended for your first foray into HMM no matter how many marathons you have under your belt.

Next, I was unsure of how to transition to the Beginner plan.  The first 5 weeks of this 18 week plan are base building - no speed work, minimal long runs, and minimal mileage.  The weekly mileage that I have been working on for the past several weeks is greater than each of the first 5 weeks.  I posed this question to the Facebook group page and received numerous responses, including from Luke Humphrey, the book's author, to let the plan catch up to you.  (Luke also reaffirmed my decision to start with the Beginner plan as several of the respondents also thought I should go with the Advanced plan.)

My current weekly mileage is at week 6 of the HMM Beginner plan so I really will be following the it for the last 13 weeks of my marathon training. Instead of doing long runs on Sundays per the plan, I am doing long runs on Saturdays, which works better for my family weekend schedule.  This shifts the whole schedule back one day so Tuesdays will be my off day, Mondays will be my speed/strength day, and Wednesdays will be my tempo day.  For the first six weeks, I am going to work on some principles of the plan:

2.  Long run on Saturday, followed by a recovery run on Sunday.

4.  Monday and Wednesday faster pace runs, SLOW DOWN on other runs.

No doubt I am still a little unsure on how this will all shake out.  I feel like I am coming into this marathon training session more prepared than I was for any previous marathon, having a solid consistent year under my belt.  I reviewed my weekly mileage for the Wisconsin Marathon in 2015, which is where I set my current PR of 3:25:50.  I also reviewed my weekly mileage for Boston 2016.  Things were much more consistent as compared to the previous year, as the red line shows!  You can see how the weekly mileage for Hanson plan compares to both my 2015 and 2016 marathon training, in table and graph form! 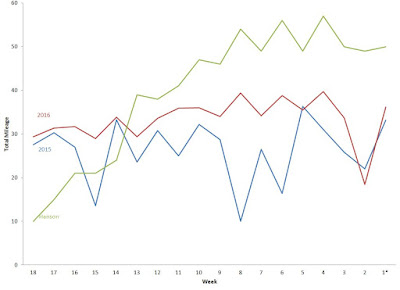 I look forward to sharing my training with you over the next 18 weeks!
Posted by Amy S at 7:10 AM